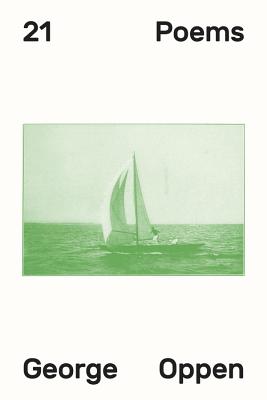 Here put your head, that desires nothing except familiarly: There your feet, bending your knees so that, bare (I remember from childhood), they would smell salt-sweet. —from 21 Poems

The Objectivist Press published George Oppen’s first book Discrete Series, a collection of thirty-one short poems with a preface by Ezra Pound, in 1934. Four years earlier, the twenty-one-year-old poet had sent an unbound sheaf of typewritten poems with the title 21 Poems  hand-written in pencil on the first page to the poet Louis Zukofsky, who forwarded them on to Pound in Paris. These poems, suffused with Oppen’s love for his young bride Mary, as well as his love of sailing, are strikingly different from what they’d eventually become in Discrete Series. The scholar David B. Hobbs recently found 21 Poems buried in Ezra Pound’s papers at Yale’s Beinecke Library, and they appear here as a collection of their own for the first time.

GEORGE OPPEN (1908–1984) was born in New Rochelle, New York. Often associated with the Objectivists, Oppen abandoned poetry in the 1930s for political activism, and later moved to Mexico to avoid the House Un-American Activities Committee. He returned to poetry—and to the United States—in 1958 and received a Pulitzer Prize for his work in 1969.